Early this morning the sky was spectacular, blazing red to the east as the sun rose, but the old saying “Red sky in the morning, Sheppard’s warning” is no lie, by evening time as I left for Neil’s workshop it was raining softly. Heading west to Galway city it got progressively worse and by the time I reached Neil’s home I knew from the floods on the roads, that it had been a very, very wet day in the vicinity of Moycullen! 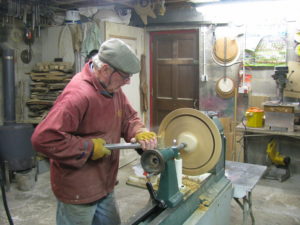 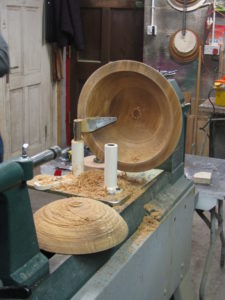 As I entered the workshop, two things’s caught my eye; one was the bowl blank, at a guess, about 16″ in Dia. and about 4½” thick, mounted on the sturdy Record Maxi 2 lathe and the other was a vertical Steambox about 4ft high by 7″ sq. made from ¾” plywood. The steam was supplied from a wallpaper steamer – very professional. What had he in the Steambox? 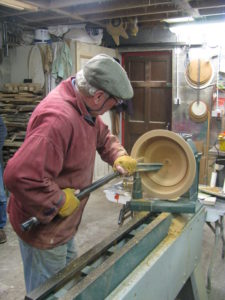 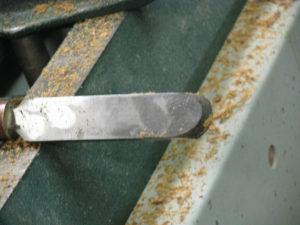 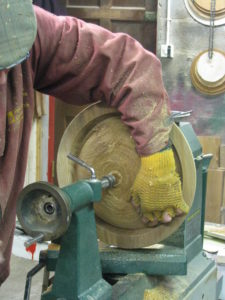 There was a baker’s dozen of us gathered around the lathe as Neil made a start with a Oneway bowl corer/saver. He set this up with a home made jig so that the base of the bowl and the rim would have a minimum thickness of 1¼”. The cutter is quite small and narrow so very little is wasted. He had it cored in a jiffy, a few taps and the centre piece popped out, leaving a very clean cut, beautifully grained, live Elm bowl blank. Using a ⅝” bowl gouge and a 1″ curved scraper Neil refined the shape to his liking. The centre piece was now reversed and with the aid of the tail-stock, it was jammed into the bowl blank and a spigot formed on it. Neil said, the Elm was cut 12 months ago and he would now weigh the blanks and record it every month and after about 10 months the weight stabilises and then he finishes the bowls. 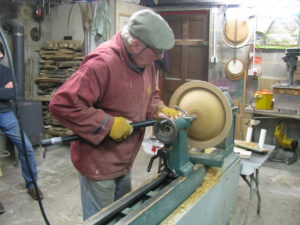 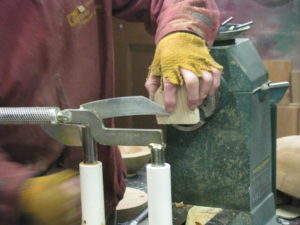 Before you could say ‘Whish to a duck’ Neil had a 9″ Dia. x 1½” thick, spalted beech blank mounted on the lathe, this would form the frame and base for a Skeleton Clock. After bringing the blank to round and truing the face, it got a quick lick of sanding-sealer followed, when dry, by a light sanding using 240 grit paper. To separate the frame from the base Neil first transferred the clock’s bezel measurement to the face and using a ⅛” parting tool, guided by a carpenter’s try square to ensure the cut was perpendicular to the face, he parted them. A Stanley knife was used to clean-up the inside edge of the back of the frame, then using a chop saw Neil cut a suitable flat on the frame to suit the width of the base. The base was then shaped with a ⅜” bowl gouge, and two small beads cut with a ⅛” beading tool – a lovely feature! A 4mm hole, followed by a 10mm counter bore, 8mm deep was bored in the centre of the base to accommodate a 50mm countersunk head wood screw, this screw and a dab of Titebond II Premium wood glue brought the frame and base securely together. (Later Neil would finish this by spraying it with a few coats of clear lacquer) 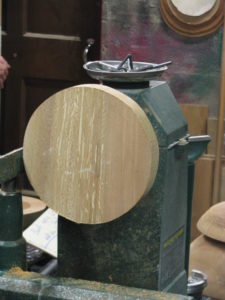 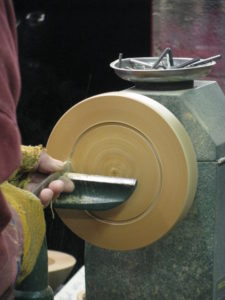 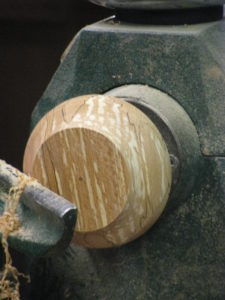 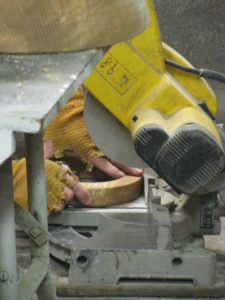 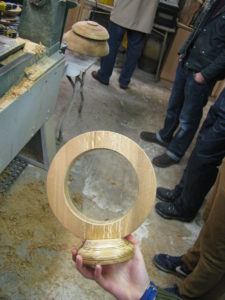 Neil’s wife Nora, ably assisted by Anne (Clancy) had an array of sandwiches, scones and numerous goodies and lashings of Tea & Coffee all laid out for us. Much munching and good natured chat followed!

Back in the workshop, Neil makes a beautiful square shaped 4 legged occasional table and he showed us how he cuts the curves and power sands the legs in a jig, the jig, a home made affair, helps to produce 4 identically curved legs.

Next, Neil revealed the contents of the Steambox, Walking sticks! He cuts these locally (and anywhere he spots a potential beauty) most were Hazel, but there were a few Blackthorn & Holly too. After steaming for some time, Neil removes them with heat resisting gloves, for they are ‘mad hot’ and proceeds to straighten out any little bends or kinks to produce a nice walking stick. He shapes the handles with a selection of ‘Surform’ tools and gives them a suitable coat of varnish or lacquer.

That was it, a great demo, well done Neil and thanks to Nora & Anne for a lovely spread and a homely welcome.