The Galway Chapter has always been a small chapter with approx. 30 members. Over the years hundreds of people have joined 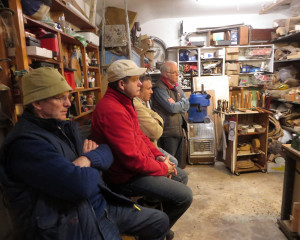 and then left again, but there a few of us limpets who have stuck around for the full journey. I can’t really remember when Colin joined it was certainly in mid-1990’s. When you have been around for that long in a small chapter the frequency of hosting a workshop comes up quite regular, every 19 to 24 months. The challenge is to keep making the topics interesting. This is what I love most about the Galway chapter is that all of members really put work into preparing these workshops. Colin is the only member of the Chapter who actually lives in the city, so on a rainy Thursday evening a small group of us gathered in Taylors Hill for Collins workshop. Hats off to those up turned up on such a bad evening. 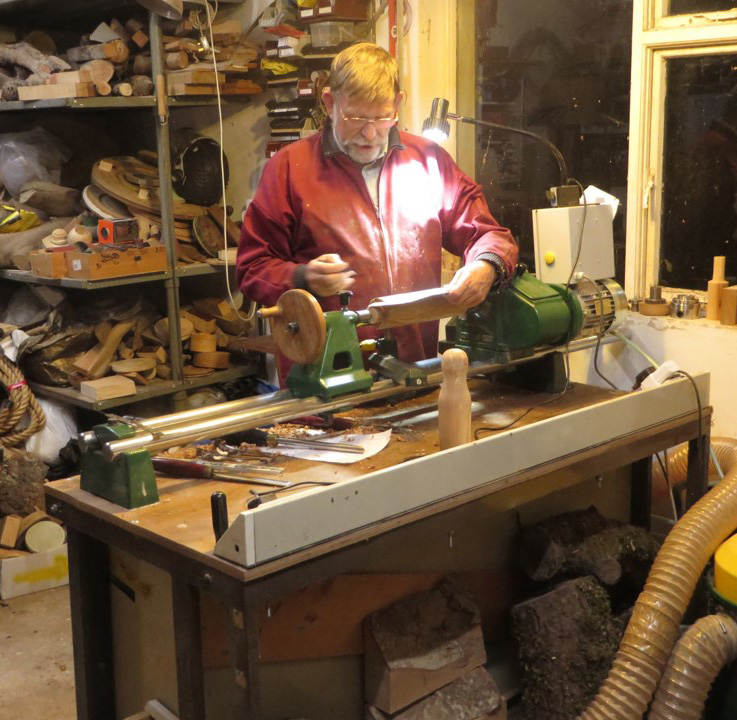 Colin kicked off the evening by turning a wooden skittle because he a turned a set for a local street party. Using a template the skittle shape emerged. Colin then produced a turned bowling ball from a previous Chapter collaboration project, but said when he was thinking of how the game could made safer for younger age groups it occurred to him that a “thrower” could be made from rope. Colin is a long standing member of the Inland Waterways Association of Ireland (IWAI) Indeed he is a past president of that organisation. He has contributed written articles and radio pieces for the IWAI. He also owns the oldest barge on the Shannon. So using his boating experience a robe ring was fashioned as a “thrower”. An impromptu game of skittles took place – let’s say the team won’t be challenging any bowling league in the near future. 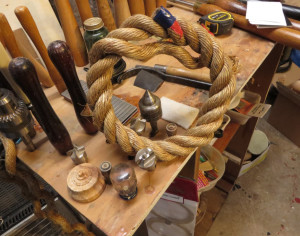 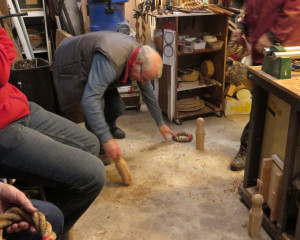 For his second project Colin produced a mirror frame he had turned in the shape of a porthole. He wanted to add something to mirror to make a more personal gift for a friend. So he etched the mirror. Colin demonstrated how this could be done using an Etching cream and a resit Gel, which come in an Easyetch Kit. This was sourced from MOP Supplies Ltd Craigavon. Patterns can be pre-printed using Adhesive Foil on a Laser etching machine but Colin cut his pattern free hand with a blade. The pattern he chose for the night was the Galway Chapter logo. The shape was cut from the film, the film taped down and the cream applied. 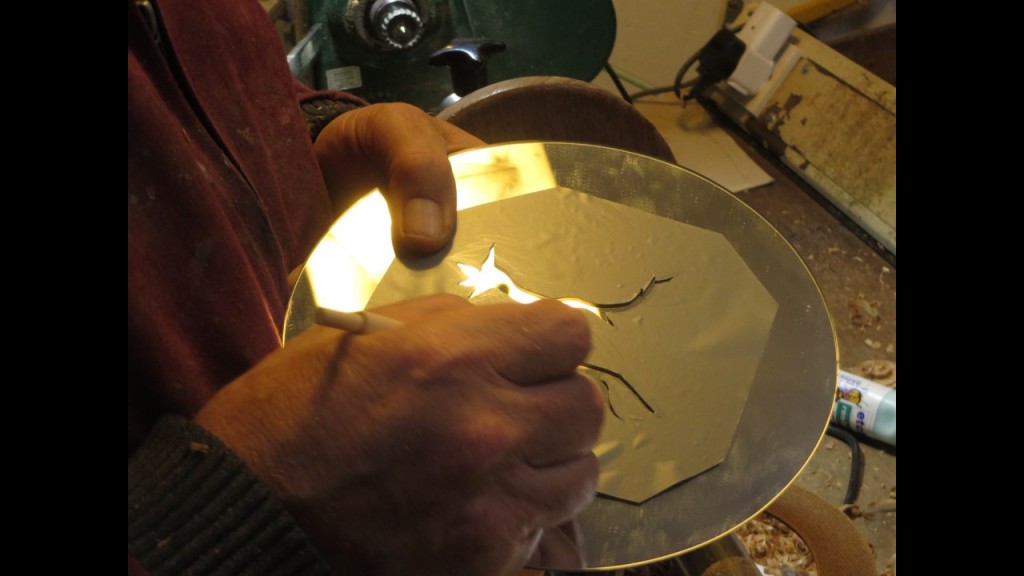 Whilst we waited for the cream to do its work it was an opportunity to go and have a tea break. This was equally impressive because management was abroad so Colin had prepared everything himself, or least he had done the necessary shopping. The Galway Chapter has always met twice a month and even though it was only two weeks since everybody had been together the chat, and stories and fun was great as always. Woodturning groups are really a community of common practice, but when combined with the closeness and friendship you can achieve in a small group it is a wonderful magical community that keeps us limpets clinging on. 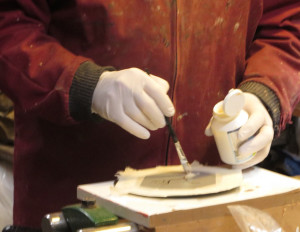 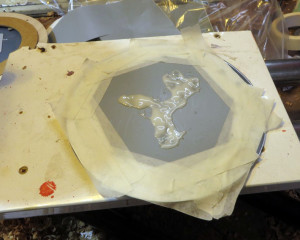 After tea we returned to the workshop. The cream was then removed to reveal the design. The mirror was inserted into the frame as a loose fit to allow for wood movement. To hold the mirror in place Colin produced a dual tab driver. This is used by picture framers and made securing the mirror easy and efficient and neat. The finished piece was really impressive. 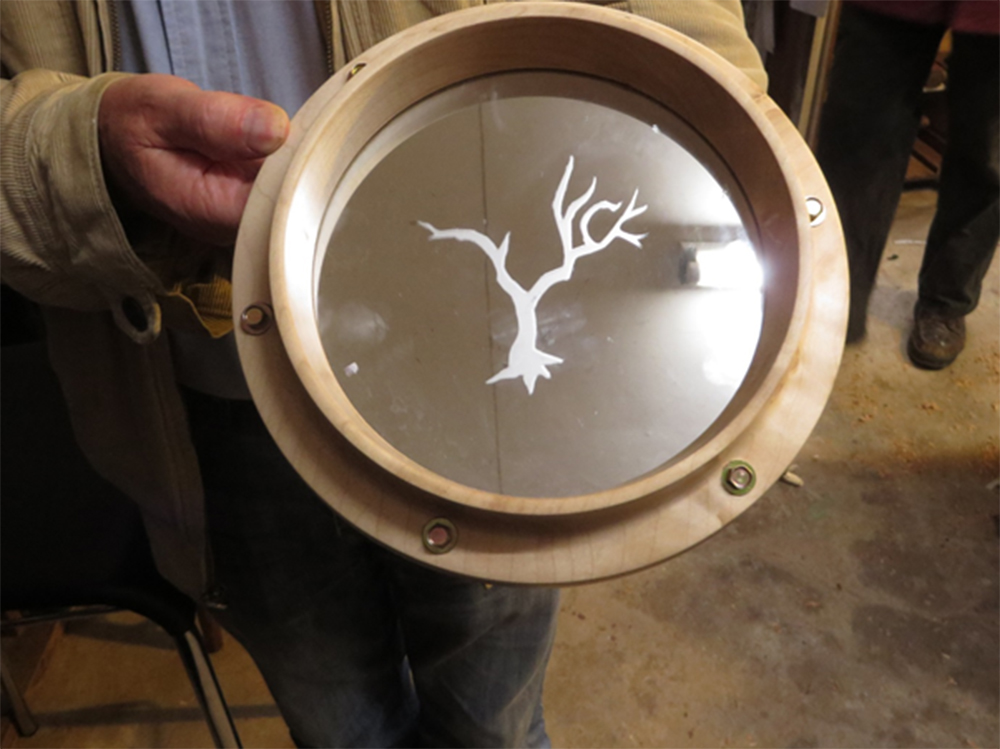 For his final project Colin turned a porridge spurtle. In the spirit of the evening everything was not as it first appeared. Colin wanted to drill through the spurtle but because he does not have a pillar drill he mounted a V-Block in the tail centre of the lathes. This allowed him to steadily hold the spurtle to drill 2 blind holes 120 degrees apart. By now the penny was beginning to drop that it was not a spurtle at all. Colin produce two other which had been pre-turned and snapping them together he had a platter stand. Colin then reached under the bench and produced a pre-turned bowl with a colour rim. He placed it on the stand to complete the jigsaw. This brought the night to a close.
Colin had certainly given us an evening to reflect on. It was a night that you could tell just on much thought and preparation he had put into the three projects, all the projects were simple but he had etched out a new angle on each of them. Thanks Colin for a wonderful night.
Ambrose O’Halloran