Brian’s workshop was to demonstrate how to make an unusual lamp and candle holders by very clever use of the band saw and a little woodturning. 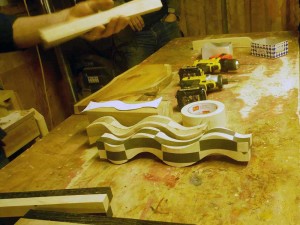 Brian started with four pieces of 20-25mm square planed all round timber approx 400mm long (two pieces being of a contrasting colour to the others), these were glued together in pairs and then each pair glued together. Brian uses “titebond 2” glue because of it’s fast drying time, he points out that if this glue is used the pieces need to be clamped together whereas if the ordinary white glue is used this would not be necessary. Once the glue has dried the long external corners are then chamfered, when the piece have been cut and the four chamfers are back to back this will form the hole for the electric cable cleverly eliminating the need for any long hole drilling. 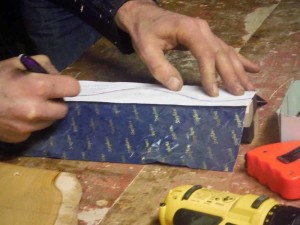 The curve to be cut is marked out on one side using a stencil and carbon paper then the stencil is flipped through 90° and the adjacent side marked and then over to the band saw where the piece is sawn along one of the curved lines keeping approx 2mm clear of the chamfers. The two pieces are then taped together and sawn along the curve on the adjacent side, the tape is then removed and we end up with four squiggly pieces of timber. These four pieces are then glued and clamped together with the four chamfers facing each other (chamfers to be kept clear of glue which would cause difficulty threading the cable through). 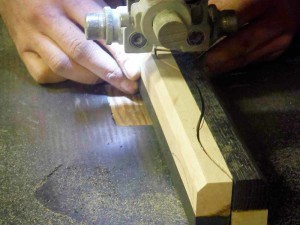 Now for the piece we all came to see the woodturning , (this step is not absolutely necessary but helps a little with the finished appearance and Brian wanted to shake the cobwebs off his lathe) Brian mounted the piece between centres using two sacrificial pieces of plywood hot melt glued on the ends to protect the piece and prevent it from being praised apart, he rounded off both ends, one end to fit into a hole that would be drilled in the base, the other end to suit the light fitting that would be used. The piece was then sanded with the round end of the belt sander and the bobbin sander. 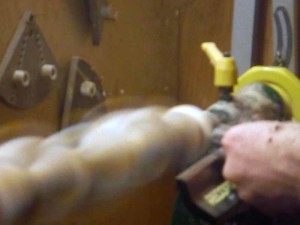 Following this we adjourned to the house for some (lots) of Edel’s refreshments and confectionaries and the usual banter amongst the members.

Next up was to get the base for the lamp ready, for this he again used the same 2 types of timber approx 15mm thick and cut these on the band saw using a jig he had made. 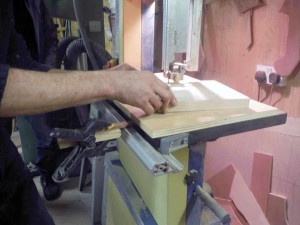 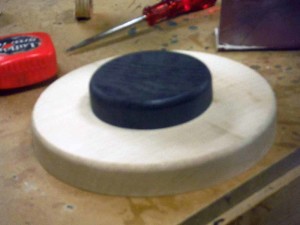 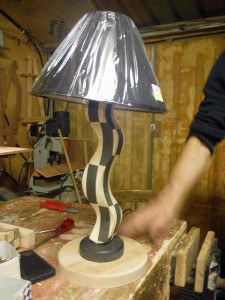 For an encore Brian showed us how to “turn” unusual shaped candle holders, for these he uses square stock (various lengths to suit different sizes). These were marked out from a template, cut on the band saw taped together turned through 90° and cut again leaving a textured candle holder that could be finished as it was or sanded down and the finished. 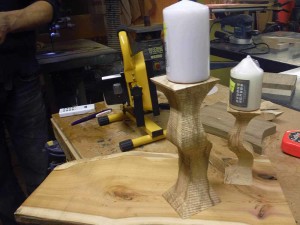 One difference in the two projects that Brian pointed out was in the lamp all the wood was used with no waste, whereas the candle holder created a certain amount of waste. Brian said he hates wasting wood at which point Martin Lodge became inconsolable but we got him calmed down shortly afterwards.

To conclude the evening Brian showed us some of the hand carving on a couple of his harps carved by a friend and words cannot describe the craftsmanship involved, I can honestly say that everyone was lost for words. Brian closed the evening with a tune on the harp which is now becoming the norm at his workshops. 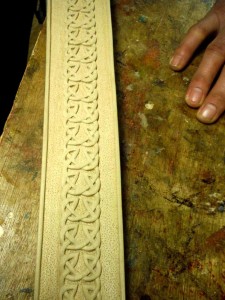 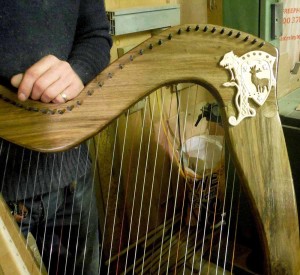 Our thanks to Brian (and Edel for the goodies) for another  entertaining, informative and most enjoyable evening.